Damienne Merlina is a comedian, actress, voice over actor, writer, painter and activist! She is high energy from Pennsylvania and Arizona with a wild story. These are the songs she brought that inform her life!

MISSY ELLIOT---We Run This
Miss was so involved in music that grades matter....zero to her. The only time grades were important was when she had to change F's into A's. She took an IQ test and tested at genius level. Everyone was shocked. She took the test again. Same score. She was considered a class clown in school and didn't want to skip ahead 2 grades and leave her friends behind. She admitted later that the “plan” was to fail her classes on purpose...but hr family moved before she could commit scholastic suicide.

Before Anderson released his first album in 2012, he was working at a marijuana farm in Santa Barbara, CA. He was let go without warning which left his new wife and infant son homeless. The next year he would become the drummer for American Idol contestant, Haley Reinhart. Four years after his stint on American Idol, Anderson would release his third album, which earned him a Grammy Award.

QUEEN---Don't Stop Me Now
Guitarist Brian May told Absolute Radio in 2011 how he loved this song and that it was “a lot of fun” but there was an underlying fear because the entire band was worried about Freddie at this time. Brian May struggled with these lyrics because it was about Freddie's hedonistic lifestyle, “taking lots of drugs and having sex with lots of men.”

TINA TURNER---What's Love Got To Do With It

Tina hated this song. It's an anti-love song and she did NOT want to record it. She turned to her manager who was working hard at her “comeback” and was sure it would be a hit. Turner is more of an actress than anyone realized. This song went #1 in 1984 and because the oldest female solo artist to ever top the chart. This record has since been broken by Cher, who recorded “Believe” in 1999. She was 52.

THE CLASH---Know Your Rights!
The first Clash gig ever, they opened for The Sex Pistols. Their first album...was not even released in America. However, it did sell 100,000 copies which made it the largest selling import album of its time.

MADONNA---Like A Prayer
The choir you hear is called The Andrae Crouch gospel choir...they were also in Michael Jackson' Man In The Mirror the year before! The choir does not appear in her video after Andrae Crouch realized what Madonna was planning to do with the video.
Talk music and comedy with her when you follow Damienne on Instagram.
Posted by YTunes Shuffle at 6:04 PM No comments:

Bo$$ Lady is Southern California, born and bred, performer, comedian, activist and rapper! She has just released an album, Champagne Pussy. These are the songs that made a big influence on her life!

SUPER TRAMP---The Logical Song
The end of the song, right after he sings “d-d-digital” is a sound that is borrowed from a Mattel handheld electronic football game. An engineer working next door, Richard Digby-Smith helped to layer the beep for the song. The sound itself indicatd a player had lost control of the football.

OINGO BOING-Just Another Day
The band was formed by Richard Elfman in the early 70's out of a musical theater troupe. They would perform Cab Calloway covers and instrumentals of Balinese gamelan and Russian ballet music. When Richard eventually left the group, younger brother Danny took over. He eventually started composing film music, and hired exclusively Oingo Boingo guitarist, Steve Bartek as the orchestrator. Films they worked on together? Pee-wee's Big Adventure, Batman series, Edward Scissorhands, Good Will Hunting, Men In Black, Spider-man, and The Nightmare Before Christmas.

THE SMITHS-That Joke Isn't Funny Anymore
This group was named by British Music Magazine, NME, as the “Most Influential Artist Ever.” Even over the Beatles. They were only together for five years and put out four studio albums, and have never had a number one hit in their home country. The closest they ever came...was when Mark Ronson (Uptown Funk), scored a cover of “Stop Me If You Think You've Heard This One Before.”

OASIS-Wonderwall
The beautiful 'cello' sound you hear, is not in fact a cello. It is a Mellotron tape-playback keyboard. I know, they USE a cello in the video...but it is a keyboard. From the album, “What's The Story Morning Glory,” this is the second biggest selling album in the UK, only after “Sgt. Pepper's Lonely Hearts Club” by The Beatles. Actually, this song, is based on “Wonderwall Music,” an instrumental album George Harrison wrote for the movie Wonderwall in 1968. (The first solo album released by any of the Beatles.)

STEVEN UNIVERSE/ESTELLE/AJ MICHALKA-Here Comes A Thought
This is from the television show, “Stevn Universe” from the episode “Mindful Education.” It was written by the show creator, Rebecca Sugar, who sang an acoustic version at the 2016 San Diego Comic-Con. She describes it as a song she wrote to talk herself off the edge.

Keep up with Bo$$ Lady (Allie Rossi) and debate the music on her social media!
Posted by YTunes Shuffle at 9:53 PM No comments:

Eric runs several rooms in Los Angeles, including The Foxfire (where they filmed Magnolia), Wednesday Funnies at The Scene in North Hollywood as well as The Workaholics House Comedy Jam where they film the TV Show, Workaholics. 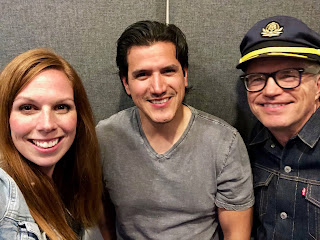 TWISTED SISTER “We’re Not Gonna Take It”
This song is used in a United Way of America video to help parents learn how to talk to teenagers. Mitt Romney/Paul Ryan tried to use the song in the 2012 presidential campaign. Dee Snider came out and denounced them using it saying “there is almost nothing he stands for that I agree with except the use of the workout program, P90X. HOWEVER, he had no problem with Donald Trump using it as his “exit song” during the 2015 campaign saying “The song is about rebellion, and there’s nothing more rebellous than what Trmp is doing right now. Although Bernie Sanders can use it as well. He’s turn things upside down too!”

SURVIVOR “Eye Of The Tiger”
Heard as the theme in Rocky III...the scene where you hear the song, the original cut of the film actually used, “Another One Bites The Dust” by Queen. The filmmakers couldn’t get the publishing rights to the song, so Stallone called up Survivor in hopes to reach a younger audience. 3 days later, Eye Of The Tiger was written.

JOAN JETT “I Love Rock N Roll”
They shot the entire video in color...during the beginning days of MTV. When the rough first cut came through, she and the director hated it. Too much red and mauve because of her poor fashion choice. However, when they did a black and white overlay, Joan thought it was extra gritty and retro. The video stood out on MTV helping to make this her best selling single of her career. The color version didn’t become available until 2008 on YouTube.

MICHAEL JACKSON “Billie Jean”
Michael was in the zone while writing and recording this song. He knew it was going to be a hit and got absorbed in the song. He nailed the vocals in one take! During a break from a recording session, he was riding down Ventura Freeway with Nelson Hayes, a producer. Michael just couldnt get out of his head thinking about the song. When he is pulling off the freeway and stopped at the light, a kid on a motorcycle pulls up and says “Your car is on fire.” All of a sudden the smoke comes into full focus and the entire bottom of the Rolls-Royce was on fire. Michael thanks that kid for saving their lives. It wouldn’t be later, after the finish of that song did Michael reflect on what could have happened if that car exploded.


JOURNEY “Faithfully”
This is the first music video for Journey. They had a lot of trouble finding someone to shoot it, so manager Herbie Herbert hired the guys from NFL Films to shoot footage of the band on the road and onstage. The same guys that filmed Walter Payton scoring touchdowns, are the ones who shot Steve Perry shaving his mustache.


Posted by YTunes Shuffle at 6:32 PM No comments:

Dark Mark is a Los Angeles based comedian. He is the host of The Dark Mark show on Renegade Radio and The Dark Mark Variety show in Los Angeles. These are the #Fave5 songs he brought in to share the soundtrack to his life!

BOB SEGER “You’ll Accompany Me”
Kid Rock sampled this for his acoustic intro of “Amen,” off his Rock and Roll Jesus Album. Frankie Ballard, a contemporary country star, laid down a more rockin’ version of the song in 2016 for his album, El Rio.


ANGELS AND AGONY “Forever”
The record label, Metropolis Records, liked the band because, even though the music can be dark and melancholic, but still danceable, the songs have a very positive message. Singer Reinier Kahle said “I’m just not the guy to write songs, singing ‘fuck’ 116 times in 4 minutes or singing I’d like to cut up my bitch or what have you.”


MY BLOODY VALENTINE “To Here Knows When”


From their second album “Loveless,” which was such a huge success and the epitome of the new genre called Shoegazing, they scored a deal with Island Records for a follow up album. Much of their advance was wasted on building an unsatisfactory studio, and the pressure to make another masterpiece proved to be too much for singer, Kevin Shields. Rumors say that he locked himself away for years in a house surrounded by barbed wire, with only chinchillas to keep him company. Their follow up came 22 years later n 2013.

ADDICTED 2 FICTION “After Dark”
This is an all girl electronic dark wave band from Brooklyn, NY and now live in Los Angeles.

A British artist, raised Catholic, converted to Sufi Islam in the early 90’s. He married choreographer Beyhan Faulkes, a Turkish woman in 1982 and had 2 kids with her before moving to Turkey. Murphy’s big scandal came in 2013, when he was driving his manager’s Subaru Forester, crashed it into another car in Los Angeles. He drove off, got stopped 6 miles away by a driver who followed him. He was also charged with driving under the influence and possession of meth. He was sentenced to 3 years probation, 10 days community service and 45 days of Narcotics Anonymous meetings.
Posted by YTunes Shuffle at 7:00 AM No comments: